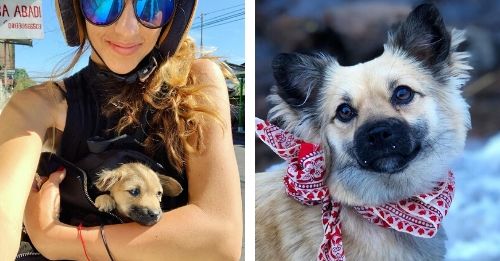 Taylor’s trip to Bali, Indonesia took an unexpected turn when she came across a tiny stray puppy on the side of the road. What started off as a tropical adventure away from home ended up being the place in which she found her forever friend.

When Taylor saw the helpless stray during her ride through town, she couldn’t help but pull over and come to her aid. She was the smallest stray she had ever seen, and couldn’t stand the thought of leaving her there to fend for herself. Without hesitation, Taylor scooped the small puppy up and took her back to her temporary home in the tropical city.

The day she found the tiny fur baby happened to be near the anniversary of her father’s death. With having a strong feeling that this helpless pup was brought to her for a reason, she named her after her father’s favorite singer, Stevie Nicks.

Within days of Stevie coming into her life, Taylor had fallen in love. With her flight home quickly approaching, she began to research the possibility of bringing her new furry friend back home to the states with her. It seemed like this pair could have the possibility of a life together in the U.S., until Stevie began to show some concerning symptoms.

Stevie started having episodes in which she would become extremely weak and display neurological symptoms that led her unable to move or walk while they were happening. Taylor immediately took her to a local vet where she learned that she was severely anemic and may be suffering from a tick disease.

With Taylor’s flight home just days away and the new information on Stevie’s illness, she knew she had to come up with a plan to do whatever it took to nurse her to health and find a way to get her home once she was well. Her condition was treatable, but she would require daily medication and a lot of TLC.

Taylor ended up finding another foreigner in Bali to take care of Stevie for a couple weeks, in which Taylor could fly home and figure out the logistics on bringing her new furry friend to the U.S.. 2 weeks later, Taylor was back in Bali with Stevie, and planned to stay there for the 3 months it took to get her healthy and complete her quarantine period that would make her eligible to fly to the states.

Taylor was dedicated to doing whatever it took to keep this sweet girl in her life, and before she knew it, the two were healthy and ready to fly back to her home in Colorado. Though it was a tedious task to get Stevie well and plan her adventure to the U.S., Taylor is couldn’t imagine her life without Stevie in it. This pair is attached at the hip, whether they are hiking through the Colorado mountains or cuddled up on the couch.

Taylor and Stevie’s story proves that when you set your mind to something, anything can happen. We are so glad that Stevie found someone to fight for her, and that she can spend the rest of her life with someone who loves her dearly!