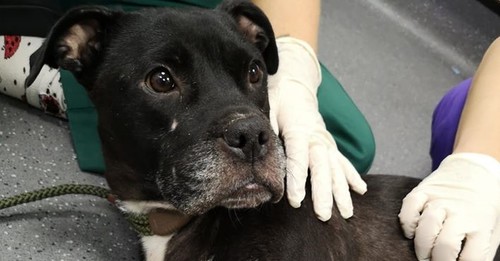 An abandoned mama dog has a long road to recovery ahead of her. Nelly, a Staffy mix, was discovered in a water-filled ditch in Birmingham, U.K. A man walking his dog spotted her and attempted to bring her onto dry land.

Nelly had been bound with a martial arts belt and tied to a nearby fence. Local firefighters were called to assist in her rescue.

The dog was incredibly grateful to her rescuers and showered them with kisses. However, the freezing ditch water was just the start of Nelly’s ordeal.

Her left front paw was severely injured and infected. Veterinarians also discovered she had recently given birth. No puppies were found with Nelly, but her mammary glands were still leaking milk.

They also determined that her injuries were not new. There’s no saying how long poor Nelly suffered in agony before she was dumped, or how long she waited for someone to come along and find her.

Vet staff contacted Animal House Rescue hoping they would be willing to sponsor the abandoned dog. After seeing her photos, they knew they had to help.

“It’s indescribable that people think that this is an acceptable way to treat an animal,” Lin Reeves of Animal House Rescue said.”Even if you haven’t got the guts to go to a vets or something and find help, there’s no need to do that. They’re just cowards.”

Unfortunately, without treatment, the infection in Nelly’s paw spread into her leg. Veterinarians had no choice but to amputate. At first she was too weak to undergo such a serious surgery. She was treated with IV fluids, antibiotics, and pain meds to help her regain her strength.

Nelly has since had her surgery, and came through with flying colors. The plan is to see her through her recovery, spay her, get her up to date on vaccinations, and find her a loving home.

According to Reeves, the only thing more shocking than Nelly’s horrible abuse is her loving attitude towards her rescuers. Despite her past treatment, she offers complete trust.

“She’s shown nothing but gentleness to the fire crew that rescued her and to all of us,” Reeves told the BBC. “She is so sweet, which is even more soul destroying because she is such a lovely girl.”

Click here to make a donation towards Nelly’s care.